With the forecast suggesting torrential rain for the whole week, the Monday on which I arrived in Tunxi looked like the best day for ascending the local mountain, Huangshan.

Huangshan, 黄山 means Yellow Mountain and is one of the top scenic spots in China. It’s actually the main reason I visited Anhui, the result of a lazy Google for “best places to visit in China”. Getting there from Tunxi is quite straightforward: a 20元 tourist bus to a drab town called Tangkou and then a shuttle bus up to the trail head or cable car.

The entrance fee to the mountain is very high: 230元. Makes me so glad to live in a country with free access to national parks. The pass is valid for three days I think, but after one day I thought I’d done the majority of it.

It’s possible to take a cable car to the summit, but what’s the point of that? It’s much more fun climbing up the endless steps. There’s a couple of different routes. I think they’re all of similar difficulty but the one I picked was the most direct which means it’s also used by these porters carrying supplies to the hotels and restaurants on the summit. Rather them than me. They had massive calves though. 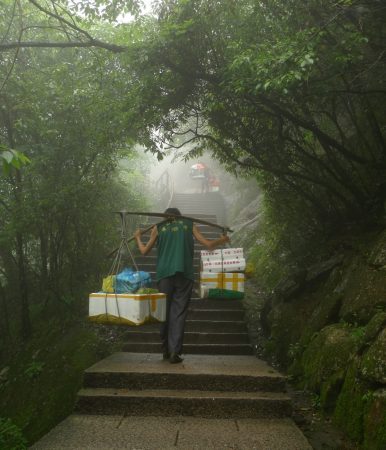 I was struck by how similar this misty path seemed to the one up Qixingshan in Taiwan which I climbed last year. At 1800m though Huangshan is a lot higher. Imagine climbing a never ending staircase in sweltering heat for two or three hours and you get the idea. Still, near the top the views were pretty good! 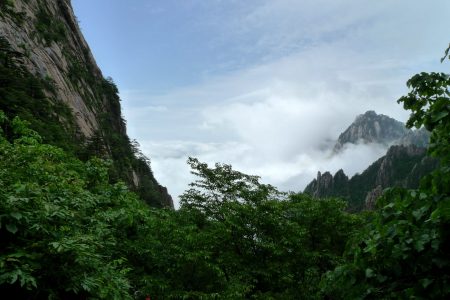 Huangshan is famous for this “sea of clouds” scene, but the weather wasn’t cooperating that day and this was the best shot I got. I met a group of photographers near the top anxiously waiting for “it” to happen. Not sure if they were successful or not 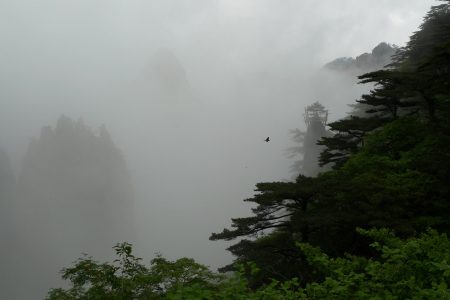 Once I reached the summit the mist really rolled in and there wasn’t much in the way of views. The summit is more of a plateau connecting several peaks than a single isolated peak, and is quite developed with expensive hotels and souvenir shops. I ambled around some of the trails before, a bit exhausted, I took the cable car back down.