Underwater nuclear reactors are an amazing idea aren’t they? Turns out someone’s already patented a design. And there are even plans to build one in Estonia!

So last night I designed my own underwater nuclear reactor, complete with multi-colour submarines and colourful aquatic beasties! 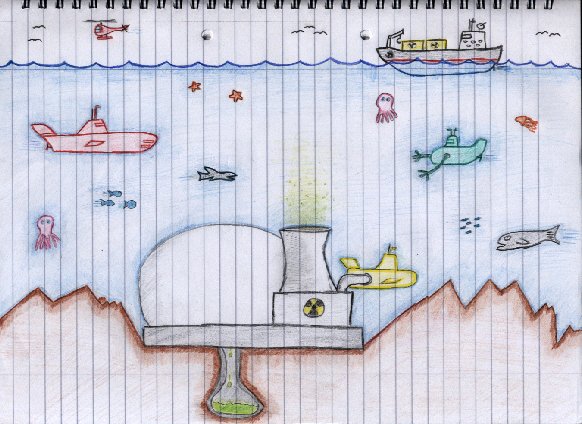 I’m rather proud of it.

I think this is also a subject ripe for Thunderbirds fan fiction… :-P

UPDATE 6/4/15: this post was previously a page but was removed when I reorganised the sidebar. Check out the rbib project on GitHub.

A parser for BibTeX databases. Mostly intended for transforming the entries in some way, such as deleting unneeded keys. But it also works as a general purpose BibTeX interface.

Example: remove all the url fields from a database:

Released under the GPLv3.

These are some of things I’m thinking of adding for xcowsay 1.1:

I’ve written a GNOME panel applet based on the xcowsay source code. It doesn’t do much at the moment – click it to run xcowfortune.

If you want to try it out, get the source code here.

You’ll need to configure it with --prefix=/usr or set BONOBO_ACTIVATION_PATH for GNOME to find it.

I’ve posted the source code of my Lunar Lander clone that I’ve be working on for a while now.

Check it out here!