Train Game (working title) is a game about trains! Woo! You control a train which you drive around a 3D world picking up cargo, trundle it about, and deliver it for PROFIT; whilst avoiding disasters like falling off the rails, hitting other trains, bad weather, or privatisation. Imagine Elite but with trains instead of space craft. Can’t believe no one’s thought of it before.

It’s going to be more of a game than a train simulator, largely because I know very little about train-mechanics. Ho hum. To be honest, I think this will make it rather more fun.

It’s very much a work-in-progress, but you can download a demo below which has these features: 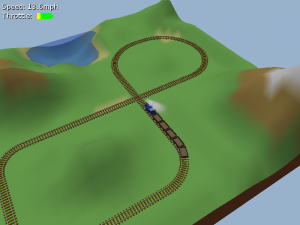 Driving the train around a small map 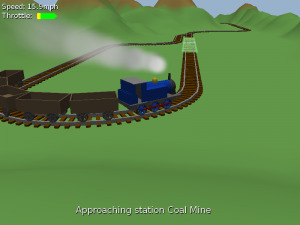 Driving towards a station 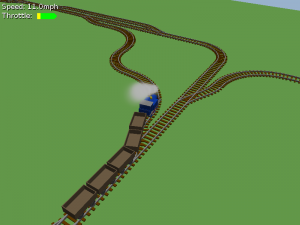 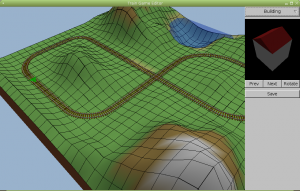 All the models are made in Wings3D.

The game is released under the terms of the GPLv3. You can get the source code here:

It should build fine on Linux – this is where I do most of my development. It has (at least) the following dependencies: OpenGL, GLEW, Boost (>= 1.37), Xerces-C++, CMake, SDL, SDL_image, and FreeType (sorry!).

To build, unzip the source code, and cd into the newly created directory. Now do the following:

Hopefully all will go well (email me or complain in the comments below if it doesn’t!). Now you can play the game by running:

(You can substitute figure8 or points for coal_mine there.)

To use the editor, run:

You can edit existing maps as well as create new ones.

Windows users! You are not forgotten! I have successfully compiled and run the game on Windows using Visual Studio 2008, but that was nearly a year ago so it may take a bit of work to get it running again. You’ll still need all the same dependencies as above. Install them and then use the CMake GUI to help it find their library/include directories.

Playing the game is fairly straightforward. Use the mouse to move the camera (it’s always directed towards the train). Use the following keys to control it: