Today I went to Pevensey Castle with my family. It’s a bit ruined but still interesting to wander around. Went to the beach as well briefly, but it was a bit too cold and windy to hang about.

The cows featured here aren’t from Pevensey but are our neighbour-cows from Hastings Country Park as seen on this blog previously.

It’s wet and miserable this weekend but last week it was exceptionally sunny! I’ve just realised I forgot to post my photos from my wanderings last Sunday when the weather was at its nicest.

I’ve been slowly making my way along the Thames Path and the next segment is from Kingston to Kew. This is a very pretty part of west London, and Richmond is particularly attractive. Unfortunately it costs a small fortune to live in this part of the world.

A few years ago blodgett and I developed a useful tool for visualising what would happen if you grafted someone’s face onto a giraffe. We implemented this ground-breaking tool in GIMP script-fu and promptly forgot about it. I only rediscovered it recently when clearing out my home directory. Here is the program’s best guess at what our beloved leader would look like were he a giraffe: 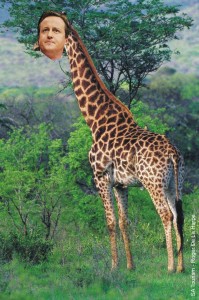 In the process of scraping off the bit rot from giraffify I remembered why we didn’t develop it further: although script-fu is joyous Scheme the interface to the GIMP is aggravating to say the least. Perhaps this is why they now have Python-fu.

If you want to perform your own giraffification simulations you need the following files:

To use, open your source image in the GIMP, select the “free select tool” and mark the border of the target face. Then go to “Script-Fu” then “Shiny” and the “Giraffify” and behold the startling results of giraffification!

Final bit of holiday blogging! After Bratislava I went to Budapest. Although it’s not actually very far the journey seemed to take an eternity. Still, it was quite fun as the train had retro compartments and the route skirted the bank of the Danube most of the way which was quite pleasant.

While the weather had been nice and sunny for most of my trip, it all went downhill when I got to Hungary and rained most of the time. This was doubly unpleasant as I was there on a Monday when most museums are closed. However, I did manage to visit two outdoor museums: the “memento park” is a collection of salvaged communist era statues plonked on some scrub-land on the edge of the city, and the “MAV nostalgia park” which is the official museum of the Hungarian state railway. Both were OK, but would have benefited from captions or a guidebook or something. The MAV park has a fantastic logo:

I think this really captures the aesthetic I’m aiming for with TrainGame! Anyway, here’s the final set of photos:

Next I headed to Bratislava in Slovakia. I really like Bratislava: it’s a bit like Prague or Budapest but quieter and more compact. There’s a castle, a bridge with a giant UFO on top, and a really cute old town. It’s also really easy to get a bus out to the countryside where there’s another castle. It even has a TV tower but alas I didn’t have time to visit it.

The hotel I stayed at, Hotel Kyjev, is a glorious/monstrous Soviet construction which proudly boasts of the “retro experience” of staying somewhere not renovated since 1972. It is also epically cheap. Perhaps for the same reason.

Speaking of communists, I saw some real life ones while I was in Bratislava on Labour day. Sadly, they were a bit disappointing. It would be generous to say there was 100 of them, and the average age was perhaps about 60. They did have some rather good banners which they waved around for a bit while a rotund man in a red T-shirt held forth on the subject of kapitalizmus. After he was done they all applauded, rolled up their banners, and went their separate ways. Not going to spark world revolution any time soon methinks.

When I was leaving my train was delayed. Not, I think, an uncommon occurrence: Slovakian trains are cute but trundle along at their own ponderous pace. I saw one train stop and a large man in an orange boiler suit got out and began bashing it with a hammer; then he got back in and the train left. Anyway, it was lucky my train was delayed or I wouldn’t have noticed this amazing mural in the hall of the train station depicting the achievements of socialism:

Here’s another collection of photos:

After Munich I went to Salzburg in Austria. It was a very nice trip with mountains and such like. By far the best thing about Salzburg is its castle which I think is the best example of a castle that I have ever had the pleasure of visiting. Lots of pictures of it below.

Also somewhere near Salzburg is the “House of the Watchmen of the Cabbage Plants” according the the castle tour but I didn’t find out exactly where. Pity, seems like this would be an excellent tourist attraction. Also, one of the bishops who built the castle had a turnip on his coat of arms.

After Salzburg I went to Vienna briefly but I don’t seem to have taken any pictures.

After Berlin I went on a train to Munich. Even on the zoom zoom ICE3 train it takes nearly six hours so I stopped off in Leipzig for a while. Leipzig was OK: it has a nice old town centre but the buildings round it are a bit grey and unloved. Also didn’t help that it was intermittently raining.

Munich itself was quite nice: some really good museums, a nice park, and little dancing clockwork people. Here are the photos I took:

Here are the photos I took when I was in Berlin recently. I quite liked it as cities go. The TV Tower and DDR Museum were especially good. Although I have to say I preferred the TV tower in Prague which was cheaper and less busy.

Can’t think of much else to say, so here we go:

I learned a useful trick today for embedding arbitrary data in an ELF executable. This is an easy way bundle RAM disks and other resources when you’re running on bare hardware.

The first step is to turn our binary data into an ELF object file:

The -I and -O mean we are converting from raw binary to our target format elf32-i386. The -B option sets the architecture field of the output file: this is required by ld. By default the binary data is placed in the .data section; --rename-section changes this to a name we can refer to in our linker script. You can omit this flag if you don’t care about the layout of your executable.

You can see objcopy has created three symbols which we can use to access the data at runtime like so:

By renaming the output section we can place the data wherever we like using a linker script like this:

What fun! Hopefully someone will find it useful.

Do you have a SanDisk MP3 player? Do you use GMPC? Do you read this blog? I suspect that set is very small but if you are in this demographic here is a treat for you: a Ruby script to copy the cover art downloaded by GMPC onto your SanDisk device.

Just run it with your device mounted under /media and it will figure out the rest.

It should be easy to hack to work with other devices or Amarok, etc.