Just because I’m in foreign parts doesn’t mean I can’t go adventuring at the weekend! Also the great thing about being in Taipei is that it’s surrounded by mountains. So Sunday morning I got the bus from just outside the hotel and 40 minutes later was in Yangmingshan national park. The bus stops about 500m up where there’s a visitor centre and a very helpful park ranger who explained all the trails thereabouts. Apparently many are currently impassable due to a recent typhoon knocking over trees. By the way “bus” is one of my favourite Chinese words: 公共汽车 literally “public-collective steam vehicle”!

I decided to try hiking up to the highest peak in the area, 七星山 or “seven star mountain” at 1100m – the ranger seemed quite impressed I could read it from the sign: minor win. :D

The trail was only about 5km long but it was steep. It was steps like this almost all the way: 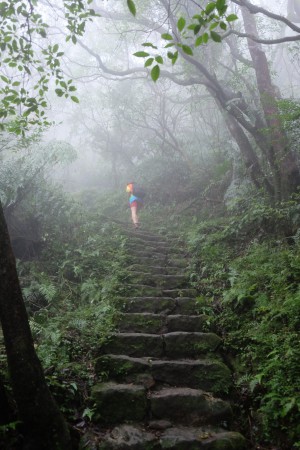 Calves ached quite a lot the next day. The western side of the mountain was covered in this dense jungle which was so noisy: I never figured out whether it was birds or insects chattering.

At the summit the weather deteriorated somewhat. You are supposed to be able to see the pacific, all of Taipei, and a range of volcanoes. But that day there was nothing to see but cloud. :-( 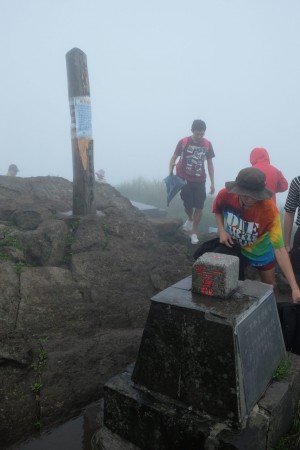 Rather than walk back down the same way I headed off the opposite side of the mountain towards another trail head. There’s a very handy and delightfully named “itinerant bus” that travels around the national park collecting hikers. So I rode that back from a place called Xiaoyoukeng.

The eastern slope is very different to the western. Because it’s exposed to the winds from the Pacific it is covered in grassland rather than jungle. But most curiously, it is peppered with volcanic sulphur vents! 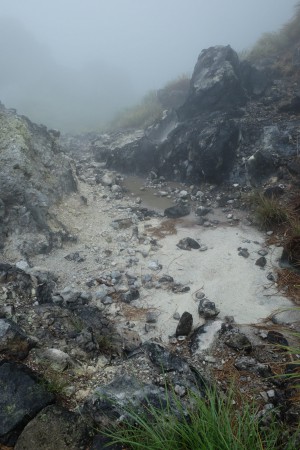 You can actually feel the heat of the steam coming out of the ground. Unfortunately my clothes stank of sulphur all the way back.