Qiyun Shan (齐云山) is one of the Four Sacred Mountains of Taoism and about 30 minutes drive or 45 minutes bus ride from where I was staying in Tunxi. The name means something like “level-with-clouds mountain”. Although it wasn’t raining when I arrived, I was ominously the only passenger on the bus up to the entrance. Just as I got off the most almighty downpour started, the like of which I have never seen before. I was trapped inside the little tourist information building for nearly an hour and a half before it eased off enough to go outside. That afternoon I found out it had been, even for China, an unusually extreme amount of rain because a number of roads and rivers had flooded. 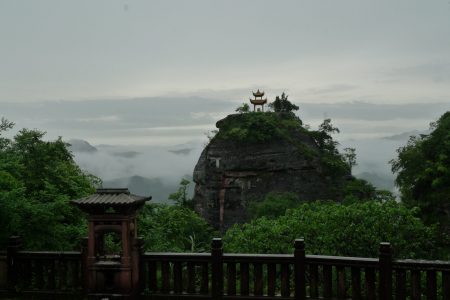 Being a holy mountain you’d expect lots of temples and you wouldn’t be disappointed. There’s a village too to explore but was utterly deserted. I think it made for some atmospheric photos though. 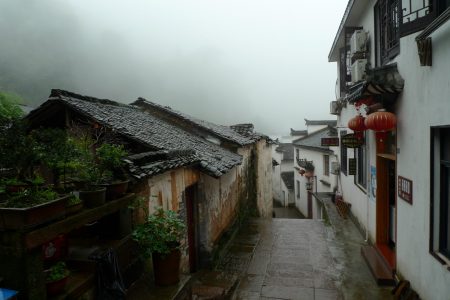 I didn’t dare hike up to the summit because there’d been several lightning strikes and the path looked a bit slippery and treacherous. On a nicer day it might be fun to walk from the summit back down to the base as there are several attractions part way down the mountain I didn’t visit. But sadly I’m unlikely to have an opportunity to go back. Maybe one of you readers will though!