After returning from Taiwan I was to enter a period of homelessness, so to prolong my trip for a bit I spent the weekend in Hong Kong. In contrast to Taipei, which as far as I can tell is perpetually cloud covered and usually raining, Hong Kong was very hot and sunny both days I was there. On Sunday I had to resort to wandering around with an umbrella up. I probably looked silly but at least I didn’t burn.

I spent most of Saturday afternoon wandering around Hong Kong island. The area around Wan Chai, in the photo below, is busy and interesting. I guess the stereotypical thing you expect from Hong Kong. Going further west you end up in the financial district. This was very shiny but totally deserted: much like the Docklands or City at the weekend. 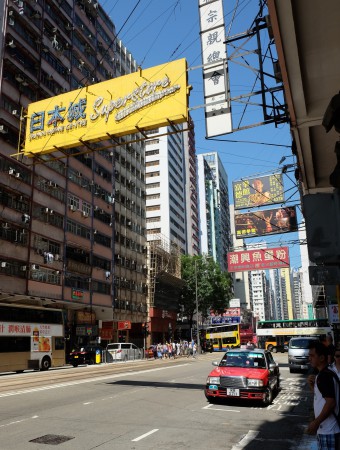 On the edge of the central park I stumbled on the Museum of Tea Ware. The exhibition was good, if you like teapots, but the gift shop is a dangerous place for your wallet – luckily my suitcase was already mostly filled by this point.

Next to the park there’s a funicular railway going up to Victoria Peak, the local mountain. It’s supposed to be a good place to watch the sunset, and as one of my mottoes is “you can’t spell funicular without ‘fun'”, this seemed like an excellent activity. Unfortunately the queue to get on the funicular was several hours long and stretched around the park. So instead I just got a taxi and arrived in time to take some sunset photos. 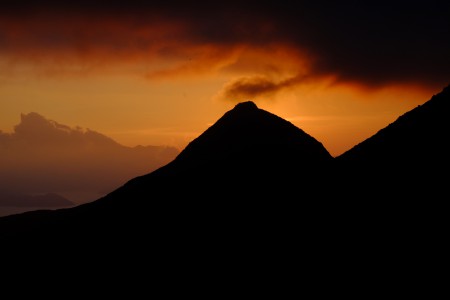 On the top of the mountain there’s a shopping mall with an outside viewing gallery. This is looking east towards the actual peak. On the other side you get some great views over the city. Shame about the building works going on at the time. 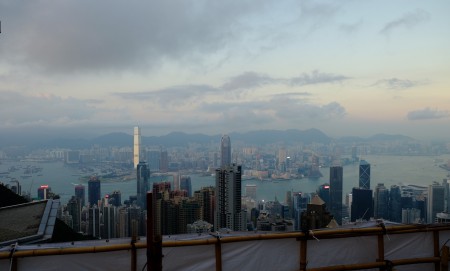 Once I got down I hopped on the ferry to the mainland and wandered along the waterfront.

The next day I was feeling a bit citied-out so I decided to go exploring further afield. First I took the train out to a place in the New Territories called Ping Shan near the border with China. There they had a local “historical trail” which visited a couple of old buildings relating to the Tang clan who were the first to settle in the area.

In the afternoon I got the train to Lantau, the other big island in the Hong Kong area, and from there a long cable car up to a place called Ngong Ping in the mountains. This place is mostly famous for its giant Buddha. 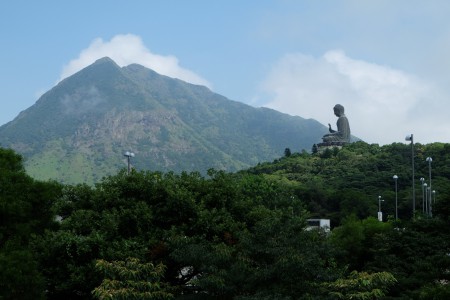 The village itself is a bit touristy but they had a nice tea shop and you could wander around some quiet trails in the area. Here’s a photo of the big Buddha with some humans to compare. It really is the biggest Buddha I have ever seen. 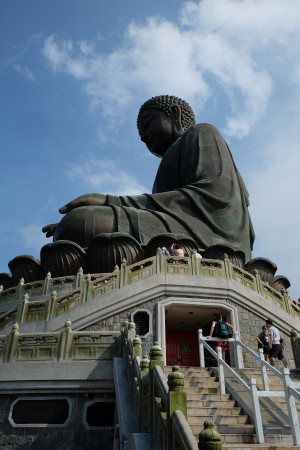 The big mountain in the background is Lantau Peak. I really wanted to hike up it, but the trail is quite long, I wasn’t properly attired, and it was 35 degrees. So instead I only went to the base of it. These guys had just come down: bet they had fun! 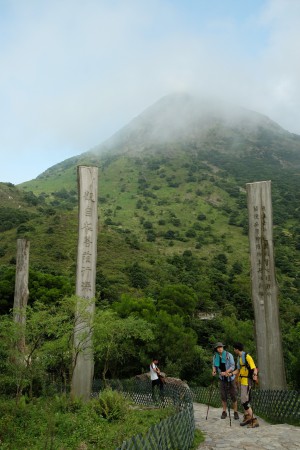 Coming down on the gondola you get some really good views of the mountains and the airport. There’s a path running all the way under the cable car: doing the peak from sea level in cooler weather would be a fun day out. Apparently there’s also a quaint traditional fishing village on the other side of the island which I didn’t have time to visit. Lots to do if I ever go again! 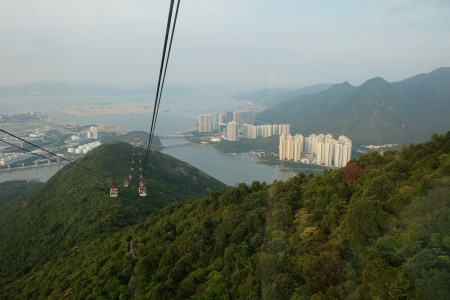