Yesterday I went for a walk eastwards from the Thames Barrier and into the estuary. Why wasn’t I at work? Because this week I’m having a staycation! As is often the case with my outdoor activities, the weather was grey and miserable. Here’s the Thames Barrier itself: 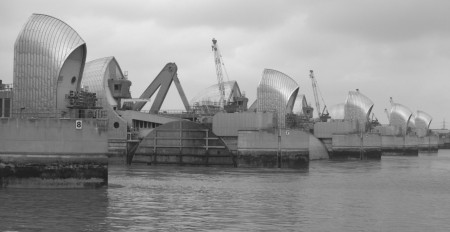 The visitor centre is quite good. Beyond the barrier the south bank is an industrial wasteland that stretches for mile after mile. Eventually you come to London’s primary sewage works at Thamesmead which proudly boasts the capacity to process the sewage of 1.6 million people. It is endless: with a six foot high concrete wall on one side and giant sludge vats on the other the effect is quite hallucinogenic. After that comes the UK’s first sludge-based power plant. Hours later I came upon Erith, a dismal suburb of Dartford, and rather wished I hadn’t.

I have to confess, I didn’t make it quite as far as Crayford Ness, the official end of the Thames Path extension. With a view like that I decided I wasn’t going to walk any further eastwards and promptly caught the train back to London to go book shopping.