You might have noticed the lack of posts in the last week or so. This is because I was 1km up a mountain in Norway. Possibly not the best time of year to be visiting, as it was incredibly cold with temperatures as low as -20°C during the day. The reason I was there was a corporate conference/holiday thing. I quite enjoyed it, especially as it was free!

To get there we went on a three hour coach journey through the frozen countryside which can be loosely described as “epic”: frozen lakes, huge forests, wild deer, tog, … This was perhaps the best bit of the whole trip.

Food was good: I consumed moose, ostrich, reindeer, and a variety of other more common animals. There was also copious quantities of free alcohol, which our Norwegian colleagues took full advantage of.

I made a brief attempt at participating in some outdoor activities: these being tobogganing which I summarise as “dangerous”, and cross-country skiing which is best described as “daft” and more thoroughly as long periods of tedious and tiring uphill skiing followed by terrifying uncontrollable sliding downhill. Not something I’ll be trying again.

The light that far north is strange. The sun takes ages to get up and go to bed, and even once it’s up it sits barely above the horizon. It was rather weird and atmospheric and makes for some excellent sunrises and sunsets which I attempted to capture here: 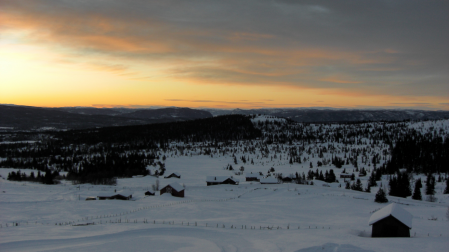 I took some photos. They’re all variants on the same theme: snow and mountains. They are also a bit hit and miss due to me not quite mastering the white-balance thingy. Also, I have become rather attached to the 16:9 aspect ratio. Anyway: