Earlier this evening I was making mashed potato as I am sometimes known to do. After boiling the potato until ripe and tender I prepared the items for the next stage: milk, salt, pepper, and the all important masher. What else? Butter, of course! The most vital ingredient. No butter in the butter hopper. Hmm. More butter must be fetched from the fridge and placed in the hopper! THERE IS NO BUTTER IN THE FRIDGE!!! Woe! Misery! I am struck with a feeling of utter desolation.

After picking myself up off the floor and calming my trembling nerves with a cool glass of milk I consider carefully what must be done. Evidently the process cannot proceed in the established “butter cloud” fashion. I could spend the night in hunger repenting that I forgot to stock up on butter at Tesco. Instead I decide to make an alarming new addition to my mashed potato recipe – after all, it couldn’t get much worse. The new ingredient: MUSTARD! I added two teaspoons of English mustard and proceeded as normal.

Results were unexpectedly good! The mustard adds a nice mustardy flavour which goes well with sausages and helps to disguise the lack of butter flavour. I may have to consider adding a little mustard more regularly. The yellow mustard colour also gives the potato a rather appealing garish yellow hue which certainly brightened up my dinner.

So, all things considered, it could have ended much worse. Still, as renowned pizza oven once remarked, “a little bit of butter makes it good!”. 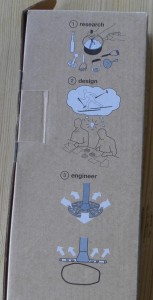