At the moment I’m staying in Hualien, a town on Taiwan’s Pacific-facing east coast. Yesterday was blazing hot, and I was feeling a bit tired from the long train journey down here so I spent a lazy morning exploring the town. 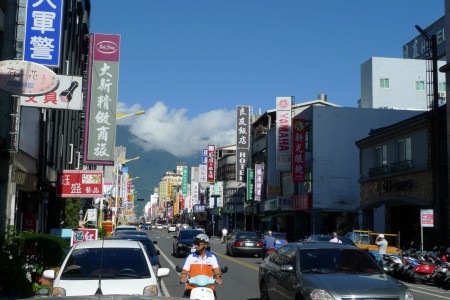 There’s not a whole lot to do here, as most of the attractions are out in the countryside. In the afternoon I rode the tourist shuttle bus around the “East Rift Valley”. It wasn’t particularly exciting, but the views were pleasant and I stopped off at Liyu lake which was quite tranquil. 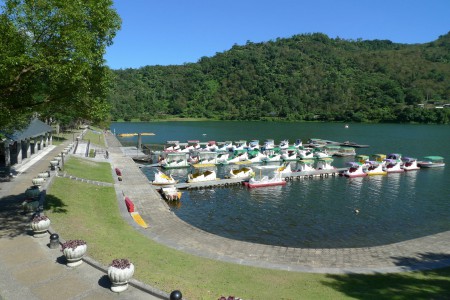 I may be halfway round the world, but the pedalos give it a very British atmosphere. Except it’s not normally above 30 degrees in November in Britain. I had to walk around under an umbrella like an old woman.

The main event in Hualien is the nearby Taroko Gorge national park. Taroko Gorge is the worlds deepest marble gorge. And I think also the deepest gorge I have ever seen, following swiftly on from Sunday’s tallest waterfall. The views are gorge-ous (get it?!). 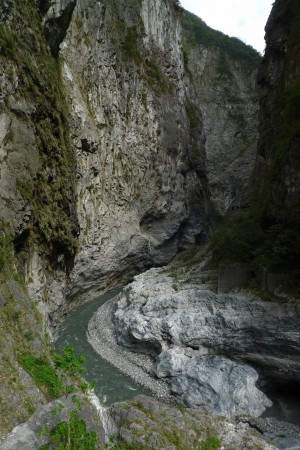 On the bus to the park I had a conversation of sorts in Chinese with a slightly cranky old gentleman. I probably understood less than 10% of what he was saying – it didn’t help that he was wearing a surgical mask – but he seemed not to mind. He talked very animatedly about aeroplanes, particularly after I said I was from 英國; English planes are his favourite. Sadly he told me Taiwan has no English planes, only American planes. Japanese planes are OK, but Chinese planes are VERY BAD. In fact, everything from China is bad. I was feeling a bit out of my depth, aeroplanes not featuring heavily in many Chinese language textbooks, so I tried asking some more standard questions “你住在花莲吗？” (he does live in Hualien), “花莲怎么样？” (it’s a very nice place). But mostly he wanted to talk about planes. I felt quite proud afterwards: it’s the most foreign language success I’ve ever had!

The national park itself seems to be set up mainly to cater to the coach loads of day trippers who want to walk along an easy 1km path, take a few selfies, and wander back again. Unfortunately if you want to do any of the more adventurous trails you have to apply for a permit at least a week in advance, and even then there are complex rules and bureaucracy. So I had to stick to the tourist trails. But I decided to do it in a slightly non-conformist way by riding the shuttle bus all the way to Tianxiang at the top and then hiking down the mountain road doing all the little trails as I came to them.

The total distance was about 13 miles, which was quite easy-going despite the heat, because it was all downhill. The road was actually fine to walk on, as there was always a path along the side and I got to appreciate the amazing views that people whizzing past in their cars couldn’t. Not that there was much traffic until late in the day anyway. 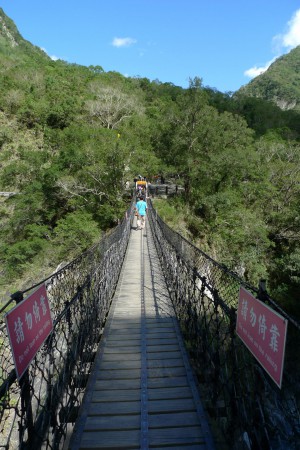 Every now and then you come to a fun excursion like this wobbly suspension bridge, or a number of small Buddhist shrines. 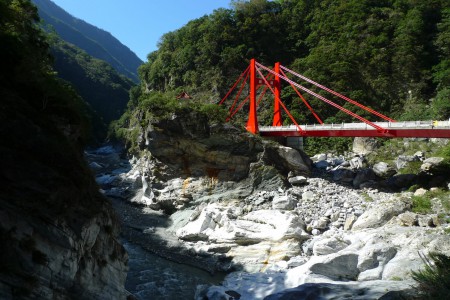 Tomorrow I’m off to Taitung, the last stop on my Taiwan mini-holiday.